A Calling That Has Changed Her Life

As OPEN M (Opportunity for People Everywhere in Need Ministry) bids a fond farewell to Dottie Achmoody upon her retirement from her role as CEO on March 31, we look back at her extraordinary accomplishments and the impact she has had not just at OPEN M but on the greater Akron community.

Dottie was born in Akron and graduated from Barberton High School. Her mother was permanently disabled by a drunk driver when she was a teenager. She became her mother’s caregiver as a young adult, delaying her own plans for college and career, but gaining inspiration from her mother’s gratitude, positivity, and perseverance. She raised two children as a stay-at-home mom, and began her college career at the age of 33. She earned a B.A. in Family Development and then a Master’s of Public Administration degree from the University of Akron, becoming a licensed social worker along the way.

Dottie’s career at OPEN M began in 1990 as Family Development Specialist, and Director of Programs, as well as Drug/Alcohol Counselor. She left OPEN M in 1997 to teach at the University of Akron, and then became CEO of Stow-Glen Retirement Village. After seven years away, OPEN M asked Dottie to return as an executive on loan while then-CEO, Tim Crouch, battled cancer. After a nationwide search for Tim’s replacement, Dottie became OPEN M’s new leader in 2005. 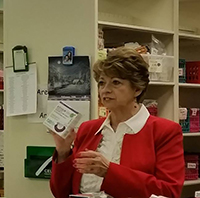 Dottie is credited with transforming OPEN M from a little known organization with a primary focus on feeding the hungry, to a thriving multi-dimensional organization supported by extensive collaborations that serves more than 9,000 people each year. She has worked to engage cross-sector leadership, build community relationships, and establish collaborations to create community conditions and resources to build bridges out of poverty for individuals and families.

One of Dottie’s first assignments as CEO of OPEN M was to raise funds to accommodate the growing OPEN M Free Clinic. A 1,500 sq. ft. addition was added to the clinic in 2006. Because of her vision and initiative, OPEN M has acquired unused and abandoned properties surrounding our building over the years. In the years and decades to come, OPEN M will have the flexibility to expand and grow our campus because of this foresight. 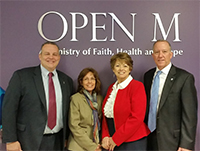 Bridges Out of Poverty

Through her work at OPEN M, Dottie was integral in bringing “Bridges Out of Poverty” to Summit County. This initiative based on Dr. Ruby Payne’s Framework for Understanding Poverty, builds bridges to help people move from financial dependence to independence. Dottie has been consistently committed to Bridges since first bringing it to Akron years ago, and OPEN M remains a vital partner in the community-wide collaborative that has grown out of this work—Bridges Summit County.

Early in 2012, Dottie led OPEN M through a process to update our vision and direction. As an organization, we made a paradigm shift—moving away from crisis intervention and toward a development strategy focused on prevention. Ever since that time, Dottie has worked to expand and align each OPEN M program to this vision. In our Clinic, education permeates our practice from intake to medical visits so that patients can take control of their own health. We focus on prevention and good self-care to improve health outcomes and quality of life. In Family Development, “Bridges Out of Poverty” work remains a priority. Dottie brought early childhood services to OPEN M to focus on prevention and kindergarten readiness. Finally, she worked to establish the Community Works Connection Program to provide holistic employment services that provide a concrete path to self-sufficiency.

Dottie worked diligently for years to grow her vision of a holistic employment program from an idea, to a plan, to reality with the launch of CWC in November 2014. CWC is now an established program here at OPEN M. At the end of 2016, more than 100 people were working in full-time jobs as a result. CWC has already changed lives and families, and the impact of this program will be felt for generations.

When discussing her legacy at OPEN M, Dottie is quick to recognize that none of these accomplishments could have been achieved without the help of countless amazing volunteers, staff, and board members. OPEN M has always been more than just a job for Dottie. It truly has been a calling that has changed her life.

For more information on OPEN M go to:  www.openm.org/