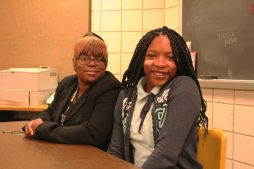 “She refers to herself as ‘the life of the party,’” Owens says with a smile.

When she first joined iC.A.R.E. Mentoring, a program of United Way of Summit County, as an AmeriCorps VISTA in August 2016, Owens didn’t know what to expect during her first lunchtime session with Takiyah and, later, her older sister Takiera, at Roswell Kent Middle School in Akron.

“At first, you’re likely to sit and stare at each other for a while, depending on how open the student is,” Owens explains. “Now, I can see the difference from when we started; both girls have opened up more. They feel like they can talk to me about things they normally wouldn’t mention with someone at home.” 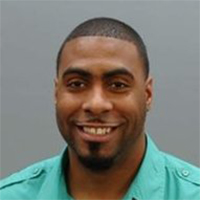 “It’s a great source of stability for students,” says Jonathan Greer, founder and director of iC.A.R.E. Mentoring for United Way of Summit County. “iC.A.R.E. is all about building authentic mentor relationships without agendas.”

With students’ parents’ consent, volunteer mentors spend one hour per week with each mentee, helping children and young adults excel academically, build confidence and acquire the skills needed to face difficult life challenges. In other words, mentors work on developing their mentees’ “three Cs” – confidence, competency and being comfortable with who they are.

“It makes a huge difference when students can spend time with an adult who isn’t a disciplinarian, just a friend,” Greer explains. “Kids with single parents often long for that connection.” 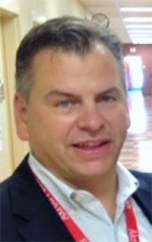 After Greer and his wife began working with children and families in Akron through a grassroots organization called Man UP, Greer wondered, “How could we support more kids and engage them?” He then began working in tandem with Andrew Ziccardi, school climate coordinator for Akron Public Schools, to bring a mentoring program into the district.

“It’s simple: kids go to school more when they have a mentor,” he says.

Since beginning in Summit County three years ago, iC.A.R.E. has grown significantly, now serving 313 students – about 1 percent of Akron Public Schools’ enrollment – with a roster of more than 200 mentors. This means there are less than 800 mentors to go to reach iC.A.R.E.’s 1,000 mentor/mentee goal by the end of the 2016 – 2017 school year.

“We want to ensure every student who wants a mentor gets paired with one,” Greer says.

United Way hired a team of 10 AmeriCorps VISTAs to help coordinate volunteer efforts and expand the program by recruiting mentors. United Way will also take advantage of its large network of corporate partners whose employees could serve as mentors in the program. 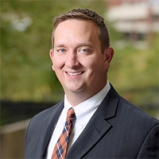 “iC.A.R.E. is a natural fit for us,” says Jim Mullen, president and chief executive officer of United Way of Summit County. “It will allow us to drive volunteer engagement and create a measurable impact in the lives of students and families in this community.”

Just as with other United Way corporate engagement opportunities, volunteers can gain the satisfaction of helping to improve their communities.

“iC.A.R.E. set a great model for United Way to get corporate partners involved,” Yesian says. “We seek companies that are willing to partner with us but also those that see the value of positively impacting kids in school.” 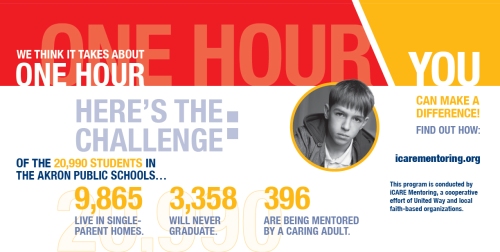 With more than a quarter of Akron Public Schools’ students not graduating high school in four years, investments in programs like iC.A.R.E. can make an enormous difference in the lives of children and young people. Unlike other mentoring programs, iC.A.R.E. works within the school system, coordinating with administrators to ensure students can spend time with their mentors without missing academic work.

“I’m confident we’re doing the right thing,” Yesian says, adding iC.A.R.E. is one of two mentor programs in Summit County recognized by the national mentoring program, which serves the fifth largest school district in the state.

Summit Education Initiative staff served on the iC.A.R.E. Mentoring steering committee to help validate the work mentors have accomplished with their students.

“More than one third of Akron Public Schools’ students change schools each year,” Greer says. Thanks to in-school mentoring programs, however, absenteeism rates for students who are mentored have been shown to decrease by 50 percent.

“Everyone who grows up with a mentor grows up differently, in a good way” Yesian says. “Mentored students have direction.”

Recalling her own mentoring experience through the Big Brothers Big Sisters of America program in Akron, Owens says, “Everyone has a mentor or someone they looked up to when they were younger, whether they realize it or not. My mentor made a positive impact on my life as a child.”

Individuals who are interested in becoming an iC.A.R.E. mentor may complete the training and begin the process at any time. Mentors choose the school where they mentor but follow their mentee from school to school, should the student move during the school year.

For more information on iC.A.R.E Mentoring, visit www.uwsummit.org/mentor. Individuals who would like to volunteer as mentors should contact Jonathan Greer at jgreer@uwsummit.org. Corporate groups should contact Sarah Catherine Teixeira by phone at 330-762-0317 or by email at steixeira@uwsummit.org. icarementoring.org