Gary Wyatt shares his path of redemption, commitment and leadership

Gary Wyatt has been on both sides of the addiction divide. Speaking to a Leadership on Main audience, the co-founder of North Hill Community House told a compelling story of personal redemption and commitment, and surprisingly to himself, leadership.

As a child, he saw his parents’ struggles with alcoholism and poverty. When he was a student and an athlete at Garfield High School, he did a “little alcohol and a little pot” now and then, he said, but never anything that got him into trouble. He enlisted in the U.S. Navy after high school to see the world, served four years and returned to Akron in 1989. 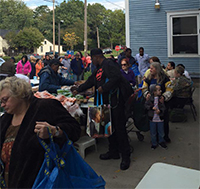 North Hill Community House, He Brought Us Out Ministry

With disarming candor and easy humor, Wyatt recounted to an audience that included two Akron police captains how this Navy Reservist and employee of the U.S. Postal Service became the “Dope Man” and went from dealing and using to being the “Preacher Man” and a force for community change.

Things had changed in Summit Lake during the four years he had been away on active duty. Cocaine and crack cocaine ruled streets. He had a job and was making some money, but not nearly enough to support him. He could see how much money was passing through the hands of drug dealers.

He began to deal and got good at it. The money got good, too. “I was running a legitimate business — to my mind – using the same skills and strategies regular businesses do,” Wyatt said.

What began as a plan to “get a little bit ahead” was becoming a way of life for him. Then his no-use discipline crumbled. He decided to test out the drugs. The testing eventually became a $1,200 a week habit.

After a three-day binge, he drove home at dawn drunk, high and planning suicide. “I was sick and tired and sick and tired of being sick and tired. I didn’t want to be known as the Dope Man.” That morning in September 1991 proved to be the turning point. He said he walked into the first church he saw in Summit Lake, which happened to be Pentecostal. He fell on his knees and committed his life to Jesus Christ. For the first time, Wyatt said, he felt free. He testified about his drug activities in the same neighborhood where now he dedicated his life “to give back to the community I had helped to destroy.”

Wyatt’s giving back has taken numerous forms over the years. With his military buddies, he started Toys for Tots in the Summit Lake area. He and his wife, Patricia, founded the He Brought Us Out Ministry and run the non-profit North Hill Community House at 526 N. Howard St. Our passion, he said, is to “impact the community one life at a time.”

Besides spreading the Gospel, the ministry runs a tutoring program during the school year for students with academic difficulties. A Building Blocks Summer Enrichment Program exposes children to a range of activities including the performing arts, career options and life skills. The ministry is a partner with the Akron-Canton Foodbank, providing food assistance to low-income families every third Thursday of the month. An Intercity Outreach Program helps educate other communities, organizations and individuals to take back their neighborhoods from violence and drugs.

As Wyatt observes the current meth and opiate epidemic and the rising casualties, he notes that each generation confronts the same challenge: To surround people who are struggling to overcome addictions with adequate support structures. His turnaround happened without the benefit of standard 12-step and agency programs. That was his destiny. His was a calling, but access to these programs is crucial for the healing addicts require, he said.

He stressed the importance of building relationships in order to tap into resources that are available to combat addictions. When he made the commitment to help rebuild his community, he could not have imagined where that would lead. Opportunities for service and influence have opened up that would have been far beyond his reach without the relationships he has built with others along the way. In 2007, for instance, the Knight Foundation invited him to sit on its Akron Community Advisory Committee. Programs such as Leadership Akron’s Signature Program connect him with networks of talent and enhance collaboration.

All that is important, but change and transformation come from within and, Wyatt insists, faith in a saving God and a sense of divine purpose are absolutely essential to overcome any kind of addiction. He offers himself as a witness and an encouragement to others. He has been clean for 25 years.

For more information go to: He Brought Us Out