Breaking the Chains of Poverty, One Link at a Time

There is a small, dedicated army of men and women hard at work changing young lives and molding future citizens with love and God’s word.

The mission of the South Akron Youth Mentorship, SAYM, is to break generational poverty – by mentoring – one life at a time, according to its executive director Donald C. Breece.

SAYM takes students, ages 5 through 19, living along the South Arlington Road corridor (from Waterloo Road to Route 76 and Kelly Avenue to Route 8), gives them a meal, provides Bible-based lessons, gives them an opportunity to play organized sports, listens to their problems and assists them in meeting their particular challenges.

“We scratch them where they itch,” Breece said.

SAYM operates four 15-passenger vans to pick up the children where they live and bring them to the mentoring sessions at the South Arlington United Methodist Church, the Macedonia Baptist Church and the East Akron YMCA.

SAYM has been in operation since 2011. This year, 27 volunteer mentors are assisting 190 boys and girls. The cost, approximately $100,000 a year, is borne by donations, fundraisers and grants.

The dedicated volunteers have a heart for children, and a desire to break the chains of their poverty, according to Breece.

“Our mentors are usually called by God,” Breece declares.

Breece’s own wife, Mary, is a grant writer for this tax deductible organization.

The stated mission of SAYM is “to transform worldview perspective from societal dependence to personal independence through application of Biblical principles, importance of education, necessity of excellence in vocational efforts, and life skills mentoring.”

One of the fundraisers is on the horizon: The Sixth Annual Golf Event is June 20 at Ohio Prestwick Country Club, 3751 Glen Eagle Blvd., Uniontown. The $125 per person ticket price includes golf and dinner. There also will be $10,000 of skill, raffle and silent auction prizes. Registration is at 10 a.m., lunch at 11 a.m., shotgun start at noon and dinner and awards at 4:30 p.m.

According to Breece, this annual event raises 25 percent of SAYM’s funding.

“Not only does it raise money and awareness of our ministry, it’s fun for golfers,” Breece said.

It’s also a learning experience this year for two high school boys in the program who are helping to plan and organize the event and will serve as emcees. They will be assisting in all the many details of this major fundraiser.

But all the funding in the world would amount to nothing without the dedication and devotion of the volunteer mentors. 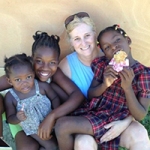 “Sometimes I am very tired, but once I get there, I’m OK,” Shearer said. “I keep them going and they keep me going.”

The girls, ranging in age from 5 to 11, are brought by SAYM to South Arlington Methodist Church every Thursday.

“They have free time to talk about their day. We do art projects, and have a Bible lesson. We try to give them some kind of food care,” Shearer said.

Shearer has been involved with the program for four years. She began serving with her church, Grace Church in Bath.

What keeps her going?

“I’m investing in the girls; building a relationship and sharing the Word. It’s a chance to spread the news of Jesus. Teaching the girls patience, self-control and forgiveness,” Shearer explained.

According to Shearer, many of the girls have only known the philosophy of an-eye-for-an-eye. Self control and forgiveness are new concepts for them.

Shearer, who has grown daughters of her own, said she is blessed to be with her SAYM charges when things are not going well for them.

“It’s just being there when they need us. Letting them know we’re still there for them,” Shearer said.

And that, according to Breece, is the power of mentoring. It creates one-of-a-kind opportunities for collaboration, goal achievement and problem-solving.

One of the opportunities South Akron Youth Mentorship offers for some of the teens is an initiation to the world of work. It’s called the Youth Employment Program (YEP).

“We have five kids this year,” explained Breece. “They earn $8.10 an hour and work eight to 10 hours each week, working for our sister ministries.”

Students do cleaning, grounds work, act as daycare assistants and do church office work. This initial work experience is for youth 15 to 18 years of age.

Another popular program of SAYM is AIM – Academic Incentive for Mentees program. The plan pays students for good grades.

“We want them to be proud of their academic achievement,” Breece declared.

“This is a really good program for kids. It gets kids off the streets,” Mack stated. “When they are in the streets, they are up to no good.”

Mack said he has known Breece, who he calls Mr. D., since he was in the fourth grade. Breece introduced Mack to SAYM while working with a youth program at Maranatha Church.

“If we get more kids in the program (SAYM) we’ll have less problems on the streets,” Mack observed.

“They feed us, let us play basketball, talk to us and help us find ways to stay out of trouble,” Mack said.

Mack credits SAYM and Breece with helping him to fulfill his dreams. One of those dreams is to have his own business. Towards that goal, Mack plans to join East High’s business program next year as a junior.

“This is a great program. A lot more people need to be in it. It should be expanded,” Mack concluded.

Breaking the chains of poverty: one link, one life at a time.

For more information go to:  http://www.saymentor.org/