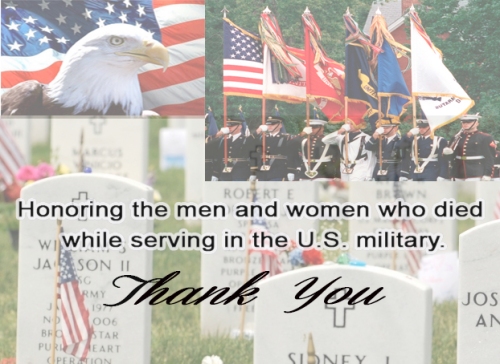 The Civil War claimed more lives than any conflict in U.S. history, requiring the establishment of the country’s first national cemeteries. By the late 1860s Americans in various towns and cities had begun holding springtime tributes to these countless fallen soldiers, decorating their graves with flowers and reciting prayers.

Originally known as Decoration Day, it originated in the years following the Civil War and became an official federal holiday in 1971.

Memorial Day, as Decoration Day gradually came to be known, originally honored only those lost while fighting in the Civil War. But during World War I the United States found itself embroiled in another major conflict, and the holiday evolved to commemorate American military personnel who died in all wars.

Memorial Day represents one day of national awareness and reverence, honoring those Americans who died while defending our Nation and its values. We should honor these heroes every day for the profound contribution they have made to securing our Nation’s freedom.

Each year on Memorial Day a national moment of remembrance takes place at 3:00 p.m. local time.

We mourn the loss while honoring the sacrifice of those brave heroes.

Let’s take a moment to honor the men and women who fell defending our country. #ThankYouForYourSacrifice #ThankYouForOurFreedom #MemorialDay #AlwaysRemember

The Duvall Awards, established in 2008 through a partnership of Summit County Children Services, the Akron Police Department and Akron Children’s Hospital, honor the memory of the late Lt. John “Ed” Duvall, Jr. – who, while with the Akron Police Department, was both relentless in his investigations of child abuse cases and deeply committed to speaking out about child abuse prevention. END_OF_DOCUMENT_TOKEN_TO_BE_REPLACED

Breaking the Chains of Poverty, One Link at a Time

There is a small, dedicated army of men and women hard at work changing young lives and molding future citizens with love and God’s word.

The mission of the South Akron Youth Mentorship, SAYM, is to break generational poverty – by mentoring – one life at a time, according to its executive director Donald C. Breece.

SAYM takes students, ages 5 through 19, living along the South Arlington Road corridor (from Waterloo Road to Route 76 and Kelly Avenue to Route 8), gives them a meal, provides Bible-based lessons, gives them an opportunity to play organized sports, listens to their problems and assists them in meeting their particular challenges.

“We scratch them where they itch,” Breece said.

END_OF_DOCUMENT_TOKEN_TO_BE_REPLACED

Hygiene and Food Bags That Were Donated

On April 19th, a group of 24 Girl Scouts from the Norton area met to assemble Food and Hygiene Bags for families served by Project RISE. Each attendee brought at least 50 items for the bags and helped put them together. Close to 200 bags were put together and given to Project RISE. The food bags contain non-perishable food items,  water bottles and the hygiene bags include items such as; shaving cream, tooth brushes, shampoo and even laundry detergent.

Project RISE (Realizing Individual Strength Through Education). Project RISE, managed by Debra Manteghi, is a federally funded program through Ohio Department of Education. This program is a collaborative effort by Akron Public Schools, local shelters and the Akron community to provide supplemental educational services to children and youth experiencing homelessness.

END_OF_DOCUMENT_TOKEN_TO_BE_REPLACED

Women, men and young children came and went from the impromptu waiting room outside the WIC Clinic at Pinewood Gardens April 30th. Children played with a bead maze while their guardians filled out forms.

The Special Supplemental Nutrition Program for Women, Infants and Children (WIC) provides services for pregnant women, recent mothers and children up to the age of five. These services include a food program, health care referrals and nutritional education.

The clinic was formed three months ago, after AMHA realized community members were traveling to Akron for their WIC appointments, Morehouse said. Macedonia was closer, but it was not on the bus line.