Mark Lakeman, founder of Portland City Repair, saw a lack of communal meeting places in his community. Now his city has made changes in their infrastructure to bring community members together.

Lakeman brought his knowledge of placemaking to the March 9 meeting of The Great Akron Innovation Network for Sustainability, or GAINS, hosted in the Summit Artspace in collaboration with Big Love Fest.

GAINS is a volunteer organization that promotes sustainability in the Greater Akron area, while Big Love Fest is an event that celebrates culture, art and music in the Akron community. 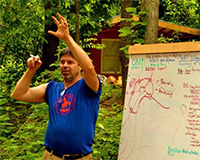 Lakeman said that because of the grid system American cities were built on, we lack meeting places. He said this isolates citizens.

“It’s not a Portland idea. It’s coming back to the ancient idea of people and place. Like a snail needs a shell or a bird needs a nest, human beings need a conducive place,” Lakeman said. “Somehow, we have to retrofit it.”

“They were building parking lots everywhere and finally there was one question,” he said. “Will we build another parking lot on this corner of will we finally have a public square after 150 years without even one public squares in the city?”

Though there was resistance from the mayor, the town square became a reality.

The movement – Portland City Repair – started in a neighborhood where two girls had been hit by a car while they were trying to get to a park. The community came together to find solutions for this and have a place for children to play.

“A mother, during that meeting, just ran out the door.  She said ‘I can’t even take it anymore,’” he said. “She ran out the door, she ran to the intersection and she put in what she called the world’s first self-service, 24-hour, chalk station.”

When the community members came out of the meeting, there was already a group of children taking advantage of it and drawing on the sidewalk.

They decided that a great way to create these meeting places was to use the large space already available in neighborhood intersections. The government originally was resistive to their idea, so they just took over the streets without getting permits and official permission.

“We did this anyway.  We got in trouble,” Lakeman said. “A policeman came along, he saw what we’d done and he said, ‘This is the most beautiful thing I’ve ever seen. When Transportation gets mad at you, I’m not going to report you. Call me and the police force will stand with you against Transportation.’”

Change came and the Portland City Council eventually voted unanimously to allow any community to shut down to an intersection and turn it into a gathering place whenever they choose.

People began building structures to support these gatherings, including such amenities as solar-powered, self-serve tea stations and little free libraries.

“All kinds of features that happen in the village square, the kind of places that we love to go to, but now you don’t need to go away,” he said. “You can stay home and be in the village of your dreams.”

People started having weddings, puppet shows and birthday parties in their neighborhood intersections.

Lakeman said this runs contrary to some mindsets that reject even benches because they are worried homeless people will sleep on them. Instead, Portland is working to give homeless people better options. This includes self-sustaining villages where homeless people are able to stay.

“Homeless people have skills and talents and families.  By God, they must be able to help themselves,” he said.  “We’ve been raising self-built, homeless villages in Portland Oregon and replicating them around the country.”

He said not only do these villages keep families together, but they also cost about 22 times less than a government-run shelter.

Along with urban agriculture, bike lanes and developments with communal spaces, Portland is also focusing on permaculture. Sabrena Schweyer, a sustainable landscape designer, said permaculture is all about having a sustainable outlook.

“Permaculture is a design methodology,” she said. “How can we live as humans together in settlements that provide for our needs but also provide for the needs of the Earth and all of the creatures that we share the planet with? It’s a whole system of thinking about the design process.”

Lakeman said this cultural shift has done a lot for Portland.

“Now we are the one major city in the U.S.A where community participation is skyrocketing,” he said. “We are the only major city in North American that has met and exceeded the carbon reduction targets of Kyoto. We have more than 50 farmer’s markets every week in Portland, Oregon. We are measurably driving less every year, per person and emitting less carbon less every year.”

Beth Vild of the Gains Planning Team said placemaking will likely be different in Akron.

“Portland is beginning to have an overpopulation problem,” she said. “We have 12 households that leave this city every week on average. So, it’s got to look different, but it’s so incredibly important that we own these spaces.”

Akron community members are launching their own City Repair. Site applications are due May 1. Sites will be chosen by May 18.

Facilitators will go to Portland for training and they will provide 10 neighborhood training sessions for each site. 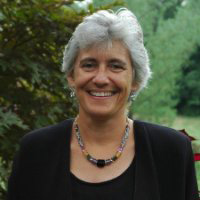 Sue Lacey, a member of the Gains Planning Team, said she hoped that recent changes in Akron’s government lead for more opportunities for change.

“We have a new administration in the city of Akron, I think we would all agree much more open and receptive to engaging with the community than our previous 27-year-old administration.  So there’s a lot of opportunity there,” she said.

Jason Roberts, found of Better Block, introduced Lakeman at the event. Better Block goes into blighted blocks and work with the community to transform the area by initiatives such as creating temporary businesses, starting bike lanes and repainting buildings.

He said he hopes Akron residents realize they are capable of creating change.

“We’ve created this system that’s developed more isolation and less connectivity between people, less tolerance,” Robert said. “It’s because we created a physical space that repels people,” Roberts said. “We don’t have to have the environment that was given to us. We can create our own environment.” 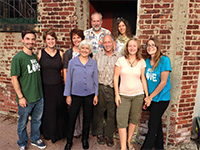 Jessica Myers of the GAINS Planning Team said creating spaces with permaculture offers a way to redefine the Rubber City.

“We’re a city who calls ourselves the Rubber City, so why don’t we use those tires, which are huge in the permaculture scene, to actually build and recreate the community,” she said. “We have so many people here who are just waiting to be engaged.”

Crhis Phillips is an artist from Brazil. She said she misses the community meeting places of her home country.

“I wish this had been done because in Brazil, every city has this get-together,” said. “Every night you don’t have to call somebody and say ‘Are you going there?’ You just go. That’s what I miss the most. I’m glad they’re trying to bring it back.”