You may have heard about the growing Akron2Akron movement, which organizes monthly walking tours of Akron neighborhoods, led by local residents.

END_OF_DOCUMENT_TOKEN_TO_BE_REPLACED

Better Block is Here: A Behind the Scenes Look (Part 2 of 2)

Better Block is Here: A Behind the Scenes Look
(Part 2 of 2)

When thinking of great cities, places we’d like to travel and explore, they’re usually far away and require either a plane ticket or passport.

But what if we made our very own cities so exciting and full of life that we never wanted to leave?

It’s the idea TED introduced to the world and the North Hill community has been working on to create the ultimate place to live, work and play.

These unique transformations of cities are designed to allow them to fully blossom into their full potential as thriving places. 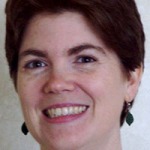 Tina Ughrin, North Hill resident and member of NHCL, hopes this isn’t just a passing story that fades within a feature story of the daily paper. She wants the stories to be shared of the day-in-day-out transformation and how they are getting to where they are going.

This includes the stages and happenings leading up to the ultimate change. One of which happened this past weekend – Better Block.

“(We want to) tell the stories of all the pieces leading up to it so that you’re building that anticipation for it,” Ughrin said of the transformation.

Ughrin has high hopes for the city.

Ughrin and others see the potential in North Hill, and all that it can become.

“I love the idea that you’ve got the burgeoning Arts District right across the bridge. There’s so much potential for a whole corridor of revitalization,” she said.

“Jason Roberts has become very enamored with North Hill and is looking at other ways to invest in it,” she continued.

Roberts is the Founder of Better Block, who shared his idea with the world at a TED conference.

North Hill is an interesting place, and now people get to see and experience that through tours.

Their Market tours brought in 60 people the first time it was offered, mostly young professionals.

And they fill up quickly.

As a result of the tours, many young professionals have shown interest and gotten involved.

“What was exciting to see on social media and I heard it from a lot of the young professionals that were on the tour was ‘It feels like we’re in a big city. I feel like I’m someplace else ‘cause we went to an African market, we went to a Nepalese market and to Redeemer Hill United Methodist Church’ which is an aging congregation and almost everyone’s over the age of seventy’,” Ughrin shared.

There’s a Bhutanese Christian community, a large homeless ministry and a food and clothing giveaway that also draws in interest.

“The young professionals asked ‘How do we help out?’ And immediately, within that next week they did a clothing drive and dropped off as many clothes as possible. They asked Reverend Debbie, ‘What are you missing?’ ‘What do you not have?’ And they made sure it happened,’ Ughrin shared.

They also got a U-Haul and helped a woman move out of her house.

“It’s very much that millennial swoop in, take care of it,” Ughrin said.

Building Up a Good Place

As momentum builds and people start to see change, Ughrin and her neighborhood hope to spark a change further than the corners of their block – beyond the streets of just their city. In North Hill and all over Akron.

“There’s a number of folks that are hoping to see North Hill as a pilot for doing it in other neighborhoods,” Ughrin said.

So maybe your block is next?

As for what needs to happen for our communities to continue to grow and flourish, Ughrin says “We really need to find champions in each of the neighborhoods.”

Are you that champion?

If you are interested in bringing this to your city, and finding out more about Better Block please visit: www.teambetterblock.com/akron/

Better Block is Here: A Behind the Scenes Look (Part 1 of 2) 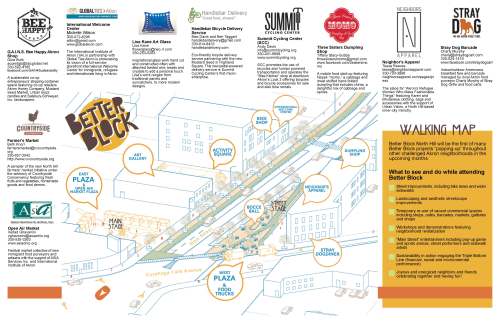 Well…it’s finally here! The day many in North Hill and its surrounding areas have been excitedly awaiting – TED’s Better Block has arrived and will fill the streets Friday, Saturday and Sunday. You don’t want to miss this once-in-a-lifetime experience.

“I think Akron’s in a renaissance. It’s really an exciting time,” Tina , North Hill resident and member of the North Hill Community Leaders group, said of the changes to come. 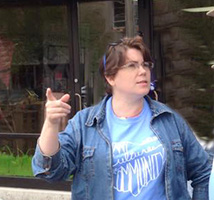 Residents and community leaders will bring new life to their city through Better Block- reactivating it, opening up the streets and filling old store fronts with new businesses – displaying the unique talents and trades locals have to offer. And not just for a weekend.
END_OF_DOCUMENT_TOKEN_TO_BE_REPLACED

Unique is one of the best ways to describe Akron’s very own growing cultural district in North Hill.

“There really isn’t anything else in Akron that has such a unique international focus as this,” Susan Wuscher, International Consultant & Contractor, shared.

And the International Institute of Akron (IIA) is watering continuous efforts to support the growth of cultural inclusion in this diverse part of the city.

With that has come many new things springing up, bringing positive change.

END_OF_DOCUMENT_TOKEN_TO_BE_REPLACED

What Better Block means for your neighborhood

Story by Chris Miller, The Akronist

The intersection of North Main Street and Cuyahoga Falls Avenue
in North Hill will be the location of Akron’s
first Better Block event (Photo: Chris Miller)

By now, you’ve likely heard about the Better Block event that takes place next weekend in the North Hill neighborhood of Akron, but this program is much more than the sum of its parts. Better Block’s an exercise in civil disobedience and imagination. It’s also a look ahead at what a neighborhood could be. And while it’s happening in North Hill this time, it could happen in your neighborhood, too.

On May 15 through 17, the “Temple Square” block in North Hill (the intersection of Cuyahoga Falls Avenue and North Main Street) will be adorned with temporary landscaping, bicycle lanes and popup businesses in currently empty storefronts, along with live music, art, an open air market and a number of other attractions.