Last week we looked at some statistics about homelessness in Summit County from the Continuum of Care’s 2013 Point in Time Count.  Let’s look a little more closely at a few more statistics.

On the other hand, the two highest counts occurred in the two most recent years.  Does this indicate a trend?

How does Summit County compare with other urban areas in Ohio for total Homeless in 2014?

So we come in towards the high side for total number of homeless population among cities in Ohio.

All of us in Ohio, though, are a far cry from the largest, urban population of homeless people in the US, in Los Angeles county:  over 34,000!

The Point in Time Count covers many categories, none that sound more heart breaking than this one:  Homeless Unsheltered Unaccompanied Children.  For 2014 there was only one child in this category in the entire State of Ohio.  We can only assume or hope that whoever found this child during the count took them someplace safe right away!

After the total number of homeless people the Point in Time Count next identifies those who are “Unsheltered.”

Just because someone is homeless doesn’t necessarily mean that they are living in an abandoned building, under a bridge or out in the park somewhere.  We don’t have 870 people living outdoors in Summit County.  We have 177 homeless people who, on one day in January, were Unsheltered.  Of those 177, 106 are categorized as Chronically Homeless.

One encouraging statistic shows that, out of the County’s 128 homeless veterans none is unsheltered. 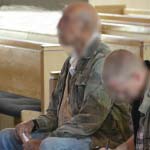 So what causes homelessness?

Some of the biggest factors that play a part in someone becoming homeless to the point that they are either living on the streets, in the woods or a shelter are:

According to PIT research in 2013 the biggest reason people were homeless was because of dealing with these issues, in this order:

These are just some of the many statistics about homelessness gathered in January every year by the Continuum of Care in Summit County for the Point in Time Count.  Every one of them leads to more questions so that we can better understand the causes and nature of homelessness in our area, with the ultimate aim that:

No one in Summit County has to be homeless, and those who are homeless are cared for.

As this series continues we will begin to explore the different causes of homelessness (such as mental illness, domestic violence, etc.), meet some of the people who are homeless, as well as the individuals and organizations that work every day to prevent homelessness and who care for those who are homeless.

Please send us any questions, comments, thoughts and ideas related to homelessness in Summit County.  You can help us shape these reports!