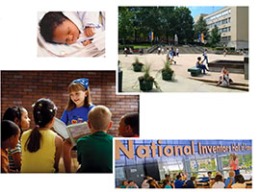 Since we last caught up with them, the Summit Education Initiative (SEI) has been blazing some brand-new trails. What began as ideas, turned into plans that are now becoming a reality – all to improve the local educational system.

“There’s a lot going on now, a lot of movement in terms of things we’re working on,” Derran Wimer, Executive Director at SEI, said.

The highlights of their current state include the fact that SEI has formed relationships with all of the school districts in Summit County, includingseveral non-public schools. They are also working in partnership with First Things First, an early childhood county wide effort, and the University of Akron.  SEI is also now housed at Quaker Square, which is part of the University of Akron.

Their ideal vision is to get all of the “players” involved in children’s lives, from what SEI refers to as the “cradle to career”, on board and connected to one another.
Also, for them to follow SEI’s “arrow of success” that marks significant points in a child’s life. This includes where they should stand educationally at different times as they grow into adulthood.

From Cradle to Career

By working with First Things First, SEI has formed relationships with well over 100 preschools that are working with 3 & 4 year olds before they even enter into a school district.

They believe this gears children up for ultimate success, leading to brighter futures.

“When we say we’re a cradle to career organization that really encompasses preschool, the K-12 arena and now the post-secondary arena. We’ve kind of built out that entire pipeline in terms of relationships with schools,” Wimer said.

Pointing in the Right Direction

As a part of making sure kid’s stay on the right track, SEI has created an arrow that points towards their ultimate purpose. The arrow is marked with six dots that represent what SEI considers to be key transition points.
The transition points go from left to right, starting at the beginning point of success.

“Those are critical times in a student’s formal education that they meet with success and at that point then they’re on track to continue to be successful at the next transition point,” Wimer explained.

Each one of the blue dots has a number or measure behind it that predicts the success of the next one.

What they are Focused on Now

Presently, SEI is focusing on this model and doing what they can to track and measure kid’s success from early childhood through college.

As the kids continue to meet each “dot”, or point on the arrow, they are headed towards success.

Keeping kids on this track and monitoring their progress is what SEI finds to be a crucial component.

“Our first thought is to have children come into kindergarten with the right tools and fundamentals preparing them so they can hit the ground running,” Wimer shared.

“The final thought is persistence in college or career- which ever it happens that they are pursuing,” he continued.

“That student needs something different- needs significant intervention support. By having those metrics in place we can monitor progress with getting everyone on track for the next transition point,” he continued.

Each one of the “thoughts” or dots on the arrow, have measures that SEI believes matter, and they can predict.

“If students hit that measure the likelihood of hitting the next dot on trajectory is very strong,” Wimer explained.

“Matt has done all the work to build out the measures and metrics behind that knowledge,” he continued.

For example, they know that if a child scores a 19 or higher on the Crow Assessment, the likelihood of them passing the 3rd grade reading test is 90%, and 77% will be at the Advanced or Accelerated level.
“So if we can get children to a 19 as they enter kindergarten, then they’re on the right track right from the very beginning,” Wimer said.

And that is what SEI is all about, setting kids up for success at the start, so they can predict their path for an even greater future in the end.

Watch for Part 2 coming soon which will go more in depth into SEI’s partnerships with the schools, why this is important, their ultimate goal, and future and emerging state.

For more info. on SEI you can also visit their website: www.seisummit.org .

One response to “The Summit Education Initiative: From Cradle to Career (Part One) 04-17-2014”